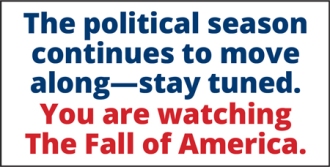 As we watch our country’s leaders make a mockery of the constitution, lie outwardly in a fashion never seen before, and attack the independent media with the threat of jail for not throwing a salute to the egos of our new Banana Republic. We are witnessing the fall of America.

We as a nation stand upon the precipice of a collapse. And we are, For the most part accepting the insanity.
We have accepted the taking away of our unalienable right to follow the Declaration of Independence which says;
“governments derive their just powers from the consent of those governed.”
As Thomas Jefferson and Abraham Lincoln both referred to the people’s “right of revolution”.
How long will we as a nation watch the events unfolding, believing that those in power will change it? Two parties just means, two sides of the same coin.
We see in other countries people rising up to oppose those decisions which are unpopular, and those have had the effect of reversing votes and policy.
The issue for us is the size of our nation. To bring millions together to halt the workings of a system that is against us, to truly let those in power know we are not amused. As celebrations of massive tax cuts for the top 2% happen in our Congress right front of our eyes.
Those in this country that would like to see everybody be taken care of, as in not starving and the ability to receive health care when needed, are the ones who give the most in time and energy to serve others throughout their lives. Most are just getting by themselves but are still willing to give to others.
Those in this country who do not believe it is worth providing these basic needs are either in the top 2%, or in the bottom 40% believing they owe nothing to anyone but themselves. All the while, pretending to follow Christ’s teachings. The funny part is that they truly bought into the fake promise of capitalism’s benefits, while being economic slaves themselves. As in this quote, attributed to John Steinbeck;

Socialism never took root in America because the poor see themselves not as an exploited proletariat, but as temporarily embarrassed millionaires.

What now? Do we wait to die a slow excruciating death of the downward spiral of this, once, Great Nation? Or do we Rise Up?
I will end this post with some inspirational lyrics from the musical Hamilton.  I have taken liberty with editing out some repeating parts to emphasize that which speaks to this post. These lyrics are from the end of the song “My Shot” All credit goes to
Lin-Manuel Miranda.
Rise up
When you’re living on your knees, you rise up
Tell your brother that he’s got to rise up
Tell your sister that she’s got to rise up

When are these colonies gonna rise up
Rise up

Scratch that
This is not a moment, it’s the movement
Where all the hungriest brothers with something to prove went
Foes oppose us, we take an honest stand
We roll like Moses, claimin’ our Promised Land

And? If we win our independence?
‘Zat a guarantee of freedom for our descendants?
Or will the blood we shed begin an endless
Cycle of vengeance and death with no defendants?

I know the action in the street is excitin’
But Jesus, between all the bleedin’ ‘n fightin’
I’ve been readin’ ‘n writin’
We need to handle our financial situation
Are we a nation of states? What’s the state of our nation?

I’m past patiently waitin’! I’m passionately smashin’ every expectation
Every action’s an act of creation
I’m laughin’ in the face of casualties and sorrow
For the first time, I’m thinkin’ past tomorrow